Kevin is a producer/director/actor working out of Denver.  Recent projects include directing CONVICTION, a one-man play at Theater Wit in Chicago, and THE DRUNKEN BACHELOR TALK SHOW, a popular multimedia talk show satire that plays in Denver. Favorite productions and projects include adapting and directing MCBETH, a comedic version of Shakespeare’s tragedy Macbeth, which garnered Kevin a nomination from the Denver Critics Circle for Best New Play. Acting credits include Lockhart in THE SEAFARER in Boulder, Colorado, and Padre Juan in the off-Broadway version of CONVICTION at 59e59 Theater in New York. Recent projects in the corporate world include developing a series of online training courses for AUTISMPRO, a company dedicated to helping folks who teach children with autism. Kevin also produced and directed over 25 video segments featured in an innovative eSimulation series for DELOITTE CORPORATE FINANCE. This program was awarded 2013’s Best ELearning program (Business Division) from the International Elearning Association (IELA). Kevin is thankful for the opportunity to help Doug and Sam bring this production to those who need to see it. 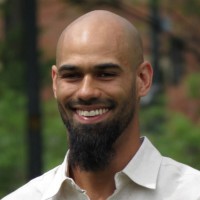 Derek is former collegiate and professional football player who turned his focus to social justice after ending his sports career. After spending 4 years as a teacher and coach in the Mapleton Public School District (where he went to elementary-high school), Derek decided to continue navigating through the world of social justice. So after working in the public school system and self-publishing two books (New Free Life and I’m Not F***ing Lyin-this is News For Love’s Intuitive Logic), Derek thought it would be great to expand on his skill set as a public speaker and community activist by joining the team at Project PAVE, a non-profit in Denver specializing in relationship violence intervention and prevention work. Now Derek leads speaking engagements of all sorts, while emphasizing the opportunity we all to create social justice. 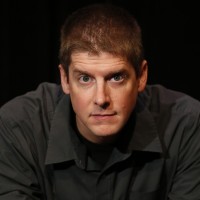 Born into a humor soaked small town Virginia family, Doug quietly absorbed inspired tales from storytelling masters. An accomplished improv comedian, he has written and performed with comedy troupes such as ACME Comedy Players, The Traveling Susans, and On the Spot, working various comedy venues such as Bovine Metropolis, Madcap Theater and Comedy Works.

For Doug it was not the laughter, but the darkness behind the humor that remained concealed. His determination to find the deeper story led to developing his own show, A Day for Grace. Originally a solo show, artistic synchronicity led to unique collaboration with roots rock legend Sam Llanas (formerly of BoDeans). Now entering its fourth year, the play will soon feature the collaborative addition of the Harlem Boys and Girls Choir Alumni Ensemble. Through Doug’s non-profit Boulder StoryHealers, he works to humanize mental health through the power of storytelling. Doug is excited to develop his video production skills with goodbrothers video.